Over the years we have told many stories for organisations across Scotland. Here are a few examples. Let us help you tell your story. 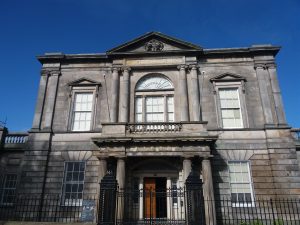 We were commissioned by the senior learning manager of Historic Environment Scotland to develop and pilot an historical interpretation for Trinity House to support the bi-centenary event on 11 June 2016 as part of the informal learning programme run by his department. After discussion with the client we developed 2 characters – a passenger and a steward – on board the SS Royal Fusilier to interpret the activities of the London and Edinburgh Shipping Company Limited and highlight the ship models in the collection especially the SS Royal Fusilier and the timetable of sailings from Leith to London. 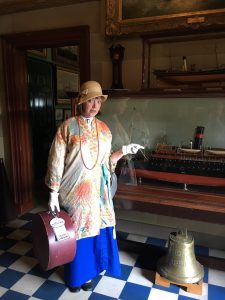 The costumed interpretation was set in 1928 reflecting the London and Edinburgh Shipping Company brochure and timetable in the Trinity House collection and information gained from the newspapers of the time. Our costumed interpreters interacted with visitors through conversation and short interactive presentations based around life on board ship to bring to life how travel has changed since the 1920’s.

Well thank you so much. This has been wonderful.  I am going to hold a Royal Fusilier dinner party. With napkins and champagne and I will remember to take the other glasses away.

It’s quite hard to make a ship model come to life, but you have given it a voice with your stories.

the success of this event led to our return visit in 2017 for Doors Open Day.

Artemis Scotland provided a series of highly successful costumed guided walks for the Edinburgh Food Heritage Trail in 2015. They took time to understand the brief, planning and researching carefully to meet our expectations. The character leading the walk was well-thought through, working in opportunities for audience interaction. The audience feedback was excellent, showing that visitors had thoroughly enjoyed the experience and also picked up our key messages. Artemis Scotland provided a high-quality visitor experience.

A selection of visitor comments collected on the days of the walk by Edinburgh World Heritage :

It’s a long time since I’ve seen my pupils so engaged. It ticked all the right boxes.

Mrs Grant who led the workshop knew the exact way to pitch this session to our class. It was an excellent example of active learning.

I’ve lived in Edinburgh for nearly 40 years and learnt so much today I didn’t know about food shopping, gardens, buildings, people – a really great walk.

Thoroughly enjoyed the tour. Thank you. It was good to have a look at the buildings as we walked down and to learn about the foods that could be bought in Georgian times.

We were asked by New Lanark World Heritage Site to provide 4 characters for the “Back in time” summer event being held in the summer of 2016 to commemorate the 200th anniversary of the opening of the Institute for the Formation of Character by Robert Owen. The characters provided on the day were: 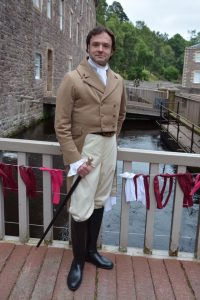 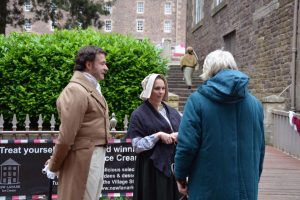 Robert Owen and Isabella in conversation with a visitor

These characters were able to highlight the various aspects of life in the Mills that was required by our client: 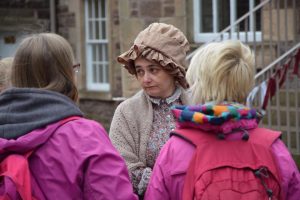 At New Lanark with Maggie

The day used informal conversation with visitors as they arrived and as they went round the site as well as on 2 formal performances by Robert Owen in the Institute for the Formation of Character using parts of speeches delivered by Owen at the time of the original opening. The characters also took part in period dancing sessions in the Institute and an event in Owen’s garden. 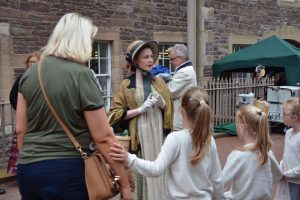 Miss Winning with some new pupils

During the Summer of 2016, Artemis worked with us at the New Lanark World Heritage Site to develop a living history experience for our visitors on our Back in Time Day. We very much appreciated the professional and direction that Artemis provided throughout the creative development process. They were particularly dedicated to telling the story of the site and their enthusiasm brought our history to life. Our visitors loved the authenticity of their work and the event was particularly successful thanks to the work they did.

Please get in touch with us here and let us tell the stories unique to you.