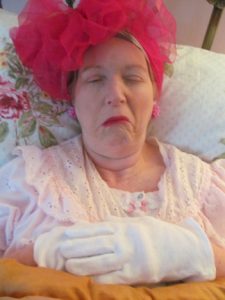 “Good morning Mrs Wylie, may I come in?”

“Yes of course Mrs Travers, but please don’t open the curtains, I have a bit of a sore head.”

“Well I did hear from Mrs Macaulay’s woman what does far more than I do , that you left the Fête dance rather late last night and were seen walking past the Post Mistress’s house wi’ a bit o’ a drink in yous.”

“A slight exaggeration Mrs T! I may have had one teeny-weeny Cinzano Bianco more than I should have, but that hardly counts as having a ‘bit of a drink’ in moi. Anyway, as the Chair of the Dance Committee I could hardly leave early, now could I? I had to cash up and pay ‘The Rustic Ramblers’ for their troubles.”

“Aye they say no one plays Shift’n’Bobbins like the Rustics. Anyway, at least yer reputation is nae as sallied as Myrtle Mctavish’s – she was nae back till 6 a.m.. She was flat on her back on the milk cart between the pasteurised and the Jersey gold top.”

“Really? And what about the milkman?”

“Trying to deliver double cream with very shaky hands. They say he may never be the same again. Of course, Myrtle has always been man mad. Now there’s your hot water an’ lemon an’ I took the liberty of bringing a wee Askit Pooder.”

“Thank you, very thoughtful. Now while you were out reconstructing my movements, did you post those letters?”

“No, as some idiot had put a plate o’ sausage rolls an’ the remains o’ a trifle intae the post box.”

“Who would do anything as stupid as that?”

“Oh, that cannot be true, I asked him to bring them home and put them in the fridge. Anyway, where is he, in the shed I suppose?”

“No, he’s snorin’ his heid aff on the swing hammock.”

“But we don’t have a swing hammock.”

Knobbly Knees and a Nun

“How are you feeling ma’am?”

“A lot better thank you. I took the Askit pooder, had a soak in the bath and have done my nails, so I am semi restored.”

“So overall the fête was successful then?”

“Yes it was. Between the stalls and the dance, we made £75 for the Home For Fallen Women, which is pretty good going really. And of course Bunty Haystack,  our local crime writer, is donating 10% of the sales of her new book to the fund.” 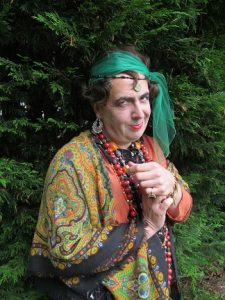 “I saw she was selling it in the tent between Gypsy Cream – her ladyship fits that role so well –  and Jasper’s Museum in a Marquee. There was quite a queue, I didnae stop as I was in the knobbly knees competition.”

“Of course, how could I not after 10 years of Cardinal Polishing your front step? It was touch an’ go though. I was almost beaten by Sister Anna from the Convent of Perpetual Motion who has been on her knees in front of Father Flynn more times than I care to mention. Very bruised hers are, but then I played the coup de grâce.”

“I rolled down my elasticated bandages and the gasps from the crowd ensured that I was awarded the trophy. “

“Not at all I couldn’t have done it without you. Tea? Oh an’ there is the back door. It’s Miss Haystack.”

Morning Tea with Miss Haystack and an Update on Jasper

“Morning Mrs T. Congratulations on your knees, I heard they were horrific.”

“Thank you Miss Haystack, it was a proud moment I can tell yous. Apologies I didnae manage to get time to purchase wan o’ yer overpriced crime classics.”

“Think nothing of it. Indeed things went so well, my editor is thrilled and is talking of a television play. So I have brought you a couple of copies. I thought you might like some holiday reading Mrs T as I understand with it being Glasgow Fair you are taking the fortnight off.”

“Yes, Blackpool this year with oor Sharon an’ the weans. I cannae wait tae get on the pier.” 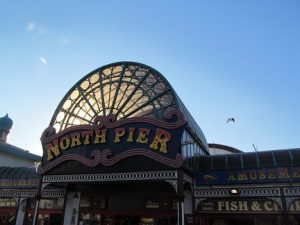 “Now Muriel I understand you and Mr Wylie are not going anywhere this summer.”

“No Bunty, we might do something later in the year. After all one does not want to be away with the bucket and spade brigade like Mrs Travers and family now does one? Jasper is also very busy. He and Mrs Dangerfield are cataloguing some Pictish finds.”

“Not this morning I shouldn’t think. I have just passed her cottage and he is fast asleep on her swing hammock.”

“Yes, Jasper is very tired. He works non-stop and snoozes non-stop too. Mrs Dangerfield is such a help.”

The Power of the Cardigan

“Thank you, Bunty, most generous.”

“Aye Miss Haystack many thanks it’ll keep me oot o’ mischief on the bus. What’s it called? I havenae got ma specs.” 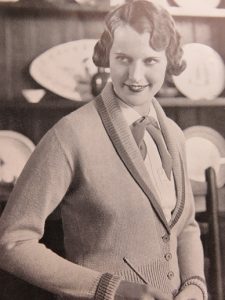 “I do like the cover. Seems an unlikely item of clothing for a murderer if you don’t mind my saying so Bunty?”

“Muriel, have you met Mrs Fraser, the new Convenor of the Kirk’s Flower Rota Committee?”

“Point taken Bunty, all oasis and no substance. I have seen Alchemilla droop in her presence, she also teaches in the Sunday School. The children call her Acid Drop.”

“Exactly, she was my inspiration, not that I would admit it outside these walls, but really she has done a disservice to the twin set.”

“Indeed, Bunty she does wear it like someone who works in chemical warfare.”

“I rest my case Muriel, anyway, hope you enjoy it- be glad to have your feedback.”

“I will tell you later Mrs Travers.”

A Lecture from Mrs Travers 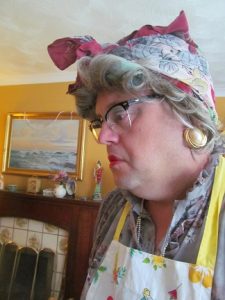 “Yes please Mrs Travers, I am rather like a parched camel.”

“Not surprisin’ really Mrs W, too much alcohol tends to gi’e one a terrible drouth.”

“Mrs T, I am not sure I appreciate this portrayal of me as some sort of lush. Fête day is once a year like Hogmanay. And you are no stranger to the port and lemon yourself, especially my port!”

“Well, Mrs Wylie, these community events are a sort o’ throw back tae ancient times. They fulfil a deep-seated need to overturn normality and act as a safety valve releasing community pressures. I wrote an essay on it fur ma sociology course. I got an A+”

“Really, you surprise me. I hope you are not going to turn into a Labour voter.”

“Och no! But sometimes I surprise even me.”

“And what happens if we do not have a safety valve like the Annual Fete or Flower Show etc. etc. to quote The King of Siam ,Yul Brynner.”

“Witch trials and all-powerful Kirk Sessions – in general the sort o’ things where women lose out.”

“Seems we lose out whatever Mrs T. Did you get my ‘Glasgow Lady’ when you were out?”

“No it hasnae come yet, but Mr Midgley in the newsagent’s had a left over “Woman” which he gave me for half price, seeing as you are such a good customer.”

“Well it’s a bit new semi-detached in Bishopbriggs pour moi, but any port in a storm. I will take it into the Morning Room with my tea and let you get on.”

We All Need A Break

“Here’s the post to take wi’ yous. Looks like a couple frae America. It’s no yer cousin’s writing, must be your friend in Roanoke. And the other has a Massachusetts address – printed name on the back, someone called Mrs J. Kennedy.”

“Are you sure, Mrs Travers, you do not actually work for the intelligence services? Have you checked for secret ink?”

“Naw, but if you give me a couple o’ seconds I’ll fetch a candle an’ some matches.”

“Perhaps not just now, I am not up to such excitement.”

“Really Mrs T! I think it’s time you were departing for your holiday. Why don’t you take the rest of the afternoon off?”

“Are yous sure? That would be great. I’ve still to look ma swimsuit oot and make the pieces fur the bus.”

“What have you made for our lunch?”

“I’ve made soup, that Italian stuff you and Mr Wylie like, Mr Strone, and there’s fresh cheese scones cooling on the rack. There’s a stew wi’ dough balls just to heat through for this evening and I’ve whipped up some blancmange for Gayle’s tea and there’s fresh Hovis for toasted cheese as I know she likes that when she gets back from Ballet.” 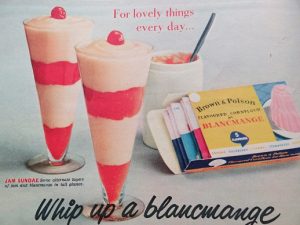 “Thank you Mrs T. Here’s your envelope and there’s a little extra for the holidays.

“Much obliged Mrs Wylie, see yous in two weeks or a fortnight.”

“Jasper, it’s yourself, been in the shed, have we?”

“Sorry Muriel, I don’t know how I got there, but somehow I woke up on Mrs Dangerfield’s swing hammock. I don’t really remember much after The Dumfries Rover with the Newton Stewart Variation.”

“It’s probably just as well Jasper; suffice to say the accordionist said he had trouble keeping up with you.”

“Anyway, I stopped at the ‘Wee But’n’Ben Gift Shop to get you this.” 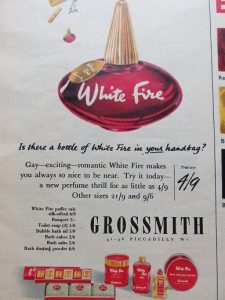 “Oh, thank you Jasper”, White Fire Perfume and Gift Pack. I have not had this before.”

“Yes, Mrs Dangerfield says it makes a woman nice to be near; she uses it all the time.”

“Any soup for lunch?”

“Unfortunately no. You can always pop round to Mrs Dangerfield’s. She looks like a woman who can do things with a can opener.”

“That’s a bit cutting Muriel, I might just take a taxi to the Club.”

“You do that Jasper. I am going to get a cardigan.”

“Cheerio, Mu, see you when I see you – by the way can you believe it some idiot has put a trifle in the post box.”