The Head On The Stamp

We join Muriel and Jasper at the Rural Bolthole preparing to celebrate a decade of Queen Elizabeth II..

A Russian who sent stamps to the west in exchange for foreign stamps which he sold at prices higher than the officially decreed figure has been sentenced to 7 years imprisonment for speculation, the trade union newspaper “Trud” said.

The Glasgow Herald 14th May 1962 (therefore it must be true) 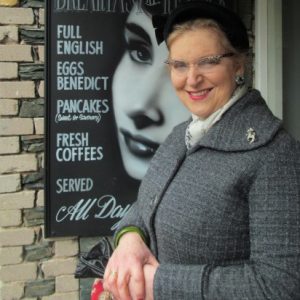 At the Rural Bolthole in the Copper Kettle Tea Rooms

“And for you Mr Wylie, is the eggs benedict again?”

“Oh, yeas please. I have a busy day ahead and Mrs Sloan (our new daily woman who does everything and more) only allowed me one slice of thinly buttered toast this morning.”

“Jasper, if Mrs Sloan finds out you will be on bread and water for the week.”

“Well, she won’t, will she Muriel unless you tell her. Anyway she is busy re-enamelling the Rayburn and sweeping the chimneys.”

“She does have some remarkable talents, Jasper, but we really should have let Jerry the sweep see to it. We need to give locals our business. He will be quite offended.”

“I know what you mean dear, but he uses brushes and Mrs Sloan does it the old-fashioned way with holly tied in bunches. I want to preserve these traditional ways.”

“Sometimes Jasper, modern is better. Anyway, do I detect a softening of your opinions on Mrs Sloan?”

“Well perhaps, but I still miss Mrs Travers. I get quite emotional when I think of support bandages.” 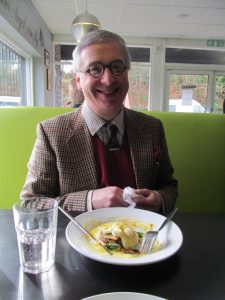 “Well here comes your second breakfast so that should cheer you up.”

A  Collectors’ Fair is in Town

“Umm delicious, I can’t decide about a cup of coffee before I go into town.”

“What do you mean town, we have a meeting with Patience Pentland-Firth, and the other Scottish Women’s Rural Institute ladies to discuss the celebrations marking the Queen’s first decade on the throne. Patience specifically asked for your input as the senior representative of the Hysterical Society.”

“I am very flattered, but I think you can manage without me. You know my thoughts and I have summarised them on this sheet. Of course, I am happy to do my bit particularly with the guided walk, but there is a Stamp and Coin Fair in town, and I have promised to take Gayle and Mrs Sloan once she has come down from the roof and scrubbed up.”

“Well Jasper I am sure we can manage although I cannot help feeling that for an outing it sounds like an unholy alliance to me. I am pleased that Gayle has taken such an interest in stamp and coin collecting. The stamp album you gave her at Christmas was clearly an inspiration. It will help with her geography. Perhaps I should instigate a geography prize at the school. Why is Mrs Sloan going, you won’t get much of a lunch?”

“Mrs Sloan it seems is something of a philatelist, not British Stamps but she has a marvellous collection of Eastern European ones. She was telling me that when she worked at Cliveden, (before she saw something unsettling involving the Minister for War in a four-poster bed) the post was full of letters from abroad and she saved the envelopes from the fires, if they were not too badly burned.”

“How fascinating, well off you go and enjoy yourselves and remember we are having drinks with Major Drummond, you know him that was in Africa and I am not going alone, I saw quite enough of his assegai last time.”

Everything is in Hand 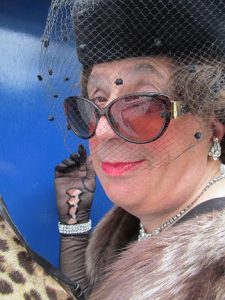 “Patience lovely to see you.”

“Darling, you look marvellous, was that Jasper I saw driving off a toute vitesse?”

“Yes, he’s gone to town for the Collectors’ Fair; he’s a philatelist you know.”

“One would never know.”

“Oh, I see, what about our Royal Weekend?”

“Not to worry, Patience he has everything in hand.”

“How comforting I like to have something in hand.”

“Stamps you say, are they valuable?”

“Interesting my late husband Rear Admiral Pentland-Firth had stamp collection. There are volumes of them in the library. Ah here come the rest of the committee.”

“Welcome ladies. Oh dear sorry perhaps, I am taking it for granted that I am chairing the meeting, Muriel?”

“No that’s fine Patience,  chair away, we are all taking it for granted that we will be doing all the work.”

“You do it so well, though. Now firstly a huge welcome to Big Nana, from all at the Rural. She has already given a substantial financial donation to our planned festivities and Nana do feel free to take off that fur coat; it is May after all and you will melt. Perhaps Muriel dear, Big Nana might appreciate your guidance on suitable clothes for the country, after all in that outfit a walk in the woods might end up in her being shot. Since the mass break out from the mink farm the farmers have become a little trigger happy.

Lottie wonderful to see you, your husband’s cheque book is always welcome. His work in concrete continues to benefit us all. With some exceptions, rumour having it that one or two Glaswegians have found themselves more immersed in the building material than they intended to be. Bunty, it’s good to have you on board, despite your republican sentiments and ongoing work for Scottish Grannies for Freedom. Always good to have a critical friend.” 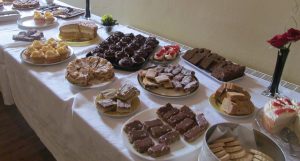 “Thank you, Lady Pentland-Firth, someone has to keep an eye on the ever – tightening yoke of oppression from that London.”

“Yes, Bunty, especially when someone else is paying for tea and scones and thank you very much Big Nana and might I say no one wears a chiffon scarf over a beehive hairdo in quite the way you do. Few could carry that look off so well outside a steamy. Yes, Muriel?”

“Might I suggest Patience, Bunty et al, that we put our political differences behind us and think of this weekend not only as a celebration of the Head that wears the Crown, but as something for the cottagers. After all it has been a rather miserable spring, what with the dockers’ strike,  the tug boat strike, the electricians’ dispute at Heathrow and the swing to Labour in the English Urban Council Elections. Not to mention the Liberal success at the Orpington by-election. Although on a positive note I am happy to share the news that the Queen Mother is favouring lavender for the spring and satin mousse five button gloves are half price at Copelands.”

“Well said Muriel and put me down for a pair of they, I mean those, moose gloves, they’ll show up my bingo pen to good advantage.”

“Well, I think Muriel’s right and let’s face it most people, at least most people Pops and I know, don’t care what the occasion is so long as there’s cake and a wee refreshment at the end o’ the day. And Bunty surely this is an opportunity to promote yer wonderful murder mysteries; you must have written somethin’ with a royal connection?”

“Well, yes, I did write “Lament for a Lute Player- The Murder of Rizzio” and “Boom in the Night – Lord Darnley goes to pieces”, my only historical novels to date.”

“I didn’t know that was you Bunty? I thought that was Frederick Favell, the historical fiction man.”

“Frederick is in fact me, Lottie. My publisher thinks horrendous historical detail is best handled by men.”

“Men – they cause most of the horrendous detail in the first place.”

“Well seems we agree about somethings ladies! Let’s get on, if we go down the route of men and their dire doings, we will get nothing done.” 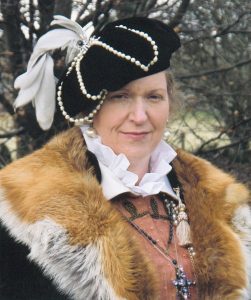 “Which brings me ladies to our business, how do we want to celebrate 10 years on the throne, Muriel?”

“I don’t think you can go far wrong with an historical pageant.”

“Presumably with you in a leading role Muriel?

“Well yes presumably Lottie, because I have already written the script and am the one with the costume for Mary, Queen of Scots, as worn by moi in Coronation year for the concert in which I played Mary at her execution in Fotheringhay.”

“Who could forget it, Muriel, certainly not the executioner! He has never been the same since his chopper went through that lighting cable. The children call him Sparky now. You really should have had a technical rehearsal, Muriel. Who would you like me to be?”

“Queen Victoria, Lottie, like her your height is the same measurement as that around your waist.”

“That’s unfair Muriel I have a complex metabolism, Dr Cronk told me so.”

“He should also have told you, that when visiting the café the question “Would you like a double Fish Supper,” the reply is no. Just for information we did have a technical rehearsal and it was your husband that moved the cable as he wanted the lighting to capture my head being removed to best advantage. Poor Chippy Wilson did not sustain injuries because of my directorial failings and at my own expense I provided him with a brand new chopper to use in the woods.”

What About a Talent Show?

“Well ladies that sounds promising, anything else? Yes Big Nana.”

“I think it would be rather fun to have a talent show.”

“Interesting idea, what do the others think, Muriel?”

“We have never done anything like that before, it would probably mean jugglers, whistling women and someone pretending to dance all the roles in a Scottish country dance.”

“Sadly, Big Nana, it sounds as if it might attract a rowdy sort.”

“Exactly Lottie, let’s celebrate Her Majesty with something fun; something the cottagers would enjoy.”

“We would need staging and a band etc, it will all be rather expensive, but you could use it for the Pageant as well, Pops’ll pay, he knows someone that plays for the BBC’s Crackerjack’s orchestra.”

“Well in that case, I think we should go ahead.”

Jasper to Provide Something Educational 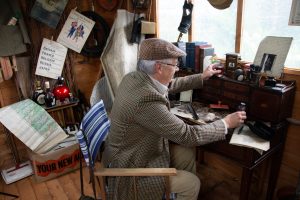 “Ladies we also need something educational by contrast. Muriel what is Jasper offering to do?”

“Jasper says he will offer a series of timed tours around the village with a royal theme, finishing at the Church for tea and cake. He’s been working hard on this.”

“What exactly will be included in this tour?  The usual unquestioning sycophantic stuff I imagine.”

“A bit harsh Bunty, you know Jasper prides himself on his role as chair of the Hysterical and likes to present balanced views. He has written here:

“That all sounds splendid Muriel, do thank Jasper. All seems well in hand. We do need a title. How about ‘The Head that Wears the Crown’ or perhaps not in Muriel’s case!