The Friday Feature – No.1

We have many costumes in our collection along with props to help tell stories. We have also been able to work in some wonderful locations that are now closed because of the current crisis. We take lots of photos and rarely have the chance to share them with you. We have decided to share these with you now and give you a peek into our world of work with our new Friday Feature.

The week we feature Queen Margaret of Scotland, wife of Malcolm Canmore who is best known for being the Malcolm in the Shakespeare’s Scottish play. Here we see the queen at Edinburgh Castle with the chapel built by her son and dedicated to her memory, in the distance. This chapel is the oldest building in Edinburgh, 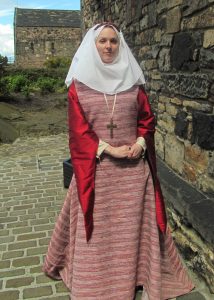 Margaret’s costume is made up of the following components – a kirtle, a cote hardie and a surcoat. On her head she wears a wimple held in place by a braid headpiece on which she wears a crown.

The stained glass window in the chapel at Edinburgh Castle features Queen Margaret in blue, a colour she is extremely unlikely to have worn in her lifetime. This is because the colour blue was associated with the Virgin Mary. The window in her chapel is Victorian and depicts her as a saint.

Her Influence on the Scottish Court

Margaret was an Anglo Saxon princess born in Hungary who became Queen of Scotland. Her influence on the Scottish court is important.

So little is ever written about women of this time beyond that of being the mother of a certain king, therefore this history, even with its faults, is really important.