The Artemis website is the home of the Muriel & Jasper blog which is set exactly 60 years from present time. It was begun as an experiment to see if we could engage people in looking at the past in slightly different way and mixes the life of Muriel & Jasper with information about life in the 1962.  Enjoy this unusual peek into the past….

A man has been into space but on Earth, men are up to their old tricks! 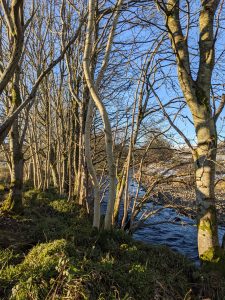 Thank goodness it is March at last. I don’t know about you, but it seems to have been a long winter. It’s the grey that gets to me.  We call it Galloway Grey. There is no other colour quite so gloomy. Of course, I knew it would be a long drawn-out affair when Candlemas was such a nice day.  As they say, and they say many things, “If Candlemas be sunny and bright, winter will have another fight; if Candlemas day be cloudy with rain, winter is gone and won’t come again.” It’s a sort of trick to lull one into a false sense of Spring. Anyway, we have thick snow in the Highlands and down the east coast to the Borders where the known world ends and “there be giants or dragons.”

However, today  in the southwest have a day of blue skies and white clouds like a willow pattern plate. There are catkins on the trees, the snowdrops are magnificent, and my Lenten roses are doing well since I removed the old leaves last month. There are even one of two early daffodils though they may be defeated by the wind. I like this time of year; there is such promise.

We are at our country bolt hole. The country can be a very noisy place. So much so that I was up early this morning, woken before first light by birdsong. 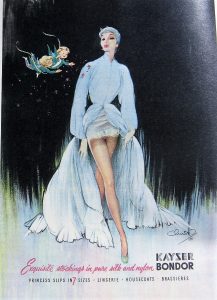 There was a hoolet (that’s an owl for the non-Scots) outside the spare bedroom where Muriel made me sleep due to snoring and jumpy legs. I said I really hadn’t noticed her snoring and jumpy legs as I was fast asleep. The hoolet was making the most incredible din. It sounded more like a pterodactyl in size. I tried to see it from the window, but it was still too dark.

In the shadows, however, I could have sworn there was someone creeping about the veg patch. I won’t tell Muriel, no sense in causing alarm, but I should probably inform the constabulary as there have been a spate of incidents regarding thefts from washing lines. Although there have been developments in the drying of laundry in recent years with the Flatley Dryer and such like, many here still like their whites to be getting a blow and a whitening on a frosty night. The thefts have mainly concerned ladies’ foundation garments. This is very worrying. Mrs Munro up the Glen, (her husband is in tubing) has lost a complete set of flannelettes suggesting the perpetrator has traditional tastes. Muriel and our neighbour Lottie Macaulay, (whose husband is a bungalow builder and is big in concrete) are furious as they have had nothing stolen, so have been out and bought a complete matching set of Kayser Bondor “just for the line” flimsies in the hope they can hold their heads up high at Saturday’s soup and pudding lunch in the church.

As I was up early, I managed to have breakfast alone while Mrs Sloan was out getting the papers. She is our new woman what does and believes in healthy eating. Fortunately, I read up on how to make porridge which I had with sugar and cream. I was just polishing it off as I heard the backdoor open and glimpsed a black lace up shoe, surprisingly somewhat muddy given her fastidiousness. If only I had made toast in advance. Still, I had made a roll and marmalade which I secreted in my dressing gown pocket – or so I thought!

A Woman Well Experienced in Bulges

“Good morning, Mr Wylie. Here is The Herald and The Spectator with The Lady magazine for Mrs Wylie. Mr Wylie, is that porridge with all the unhealthy trimmings I smell? As for that bulge in your pocket might that be a heavily buttered well-fired roll smeared with thick Dundee Marmalade? Hand it over; we don’t want our blood pressure going through the roof, do we? I won’t tell Mrs Wylie on this occasion, but we are not going to let that happen again, are we? 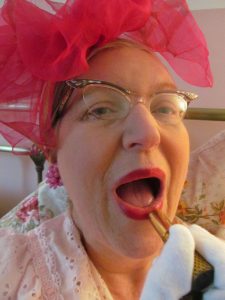 Now, is Madame still in her boudoir? In that case I will take her hot water and lemon. Now coffee at 11 and don’t think I am running down to that shed of yours; it’s not in my contract.”

Thank goodness I have the shed and a secret spirit kettle. On damp days I have been tidying out my Museum in a Shed ready for the new season of what will, undoubtedly, be an avalanche of enquiries about interesting things that happened in the past. I have a bit of a leak in one corner where the roofing felt has come off in a storm, but otherwise not too much to worry about. My collection of carved stone balls are fine and my wooden bobbins from the old woollen mill are intact, with no more woodworm than before.

Oddly though my card index of ‘Interesting Rustic Farm Gates’ seems rather more disorganised than I remember leaving it. I don’t recall leaving out my file containing the draft of my talk for the hysterical on Old Mortality: and other fascinating Graveyard Inscriptions. More annoying is that my stash of caramel wafers seems to have been eaten by mice leaving only the wrappers. 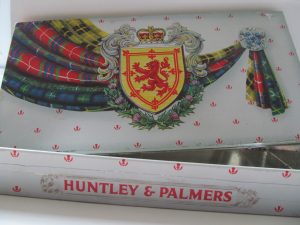 Not only that but my cabinet containing souvenirs of the Queen’s Coronation, which I am preparing for a talk to the Capodimonte Society in  to mark the 10th Anniversary of H.M. becoming queen is in disarray. My prized Huntley and Palmer shortbread tin was open which is very odd. I could have sworn I did not leave it open.  I cannot help feeling someone has been in here rootling about. Perhaps the “Naughty Knicker Nicker” has been in here, thinking there might be a collection of Victorian Unmentionables. I had better change the lock. First it’s coffee time, and a trip back to the house. To think Mrs Travers would have come down that path in a hurricane to bring my morning coffee and newly baked scones. I wish she was here.

Who Could That Be?

“There you are Mr and Mrs Wylie, Coffee. Sorry I am a few minutes late; just setting a delicious, nutritious, junket pudding ready for lunch.”

No Jasper, Mrs Sloan has your interests at heart, quite literally. Isn’t that so Mrs Sloan?”

“Of course, Mrs Wylie, Mr Wylie’s heart is all I think about.”

“Oh, that sounds as if someone is at the door. Now I wonder who this might be? It sounds like Pops. He, and Big Nana, have just bought the old McGregor Place, on my advice of course. 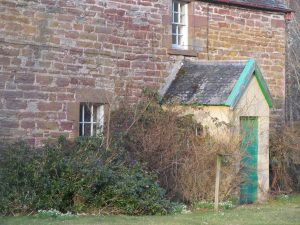 I said to Big Nana that anyone who is anyone in the West End needs a rural bolthole. It needs a bit of care and attention, but with their cash it shouldn’t be a problem.”

“She seems an unlikely friend for you Muriel but it’s so kind of you to make them feel at home, despite leanings towards leatherette sofas not to mention the juke box.”

“I do not judge a book by its cover Jasper.”

Pops and Big Nana Have an Emergency

“Pops, how lovely to see you. How are you settling into Shangri La, as we weekend rustics like to call our little corner of paradise?”

“Indeed; and if I might give you some advice? Tell them everything because as you have discovered either they already know it or have made it up. And what they make up usually turns out to be more or less true. Now can I interest you in some delicious coffee?”

“That’s maist kind, but we hae a bit o’ a sit-you-attion. Oor Doreen, that’s the youngest but two, is, as they say. “ up-the-duff” an’ the baby’s comin’. The doctor is nowhere tae be foond an’ the midwife’s up one o’ they glens administering wan o’ they castor oil medications an’ won’t be back ‘til mid afternoon.”

“Yes, she’s very fond of the purge and old-fashioned remedies is Nurse. You should see her cow dung poultice, though not yet perhaps. Well, ‘Nil Desperandum’. I was in S.O.E. during the last Unpleasantness, and am trained in these matters. Many was the time Dynamite Di, Winnie of the Wool shop and I had to deliver a baby by candlelight in a French basement under fire. Let me grab a few things and I will get right over. You have a coffee with Jasper. Just one thing…”

“I didn’t realise  Doreen was, as we say, enceinte. Big Nana said she was just a bit too fond of the City Bakeries apple turnovers.”

“Aye ken Mrs Wylie, but yoose see our Dorreen is nae married an’ Big Nana thought our new neighbours would judge us.”

“Some might Pops, even although this is 1962 and we might at any minute be obliterated by the comrades. However, it’s more common than you think. Here in the country for example no one is exactly who they think they are.”

“They do all look alike.”

“My point exactly; now tell me do you have an older daughter with children, where an additional sister wouldn’t look out of place.”

“Ideal. Now let’s get going. Mrs Sloan, perhaps you would assist me?”

The Importance of Three Books 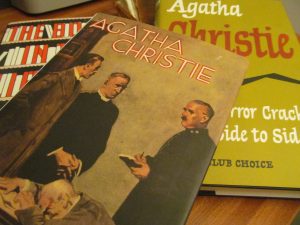 “Well Pops how were you planning on spending the day?”

“Well I wis jist thinkin’ o’ going intae toon fur a wee pint an’ a bit o’ a flutter on the horses. Not your sort o’ thing wi’it bein’ a bit common.”

“Well you are wrong there Pops. Flat racing at Kempton Park, Frenchman’s Cove in the Corinthian Handicap Steeplechase tomorrow – let’s go, my car or yours?”

“The new Jag is outside, but Big Nana does’nae approve.”

“So where are we sayin we are goin’?”

“We can fix that easily; on the way we can stop at the library get three books each and that’s you fixed for Saturday mornings.”

“For as long as books are written and libraries last.”

“Quite a lot, over the years especially during Ascot and the Derby. You’ve no idea how many inter-library loans come in that period and call me.”

Someone Who Knows Fiction When She Sees It

“Goodbye Mrs Sloan. Just changing our books at the library.”