Muriel’s Musings on The Beginning of June 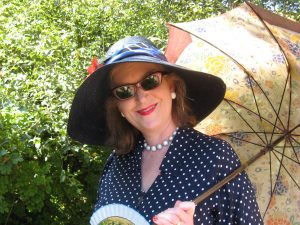 Tatties and Holes in Shoes

May has been a most beautiful month. It is often the case in this part of the world. June usually arrives along with a deluge spoiling school sports’ days and summer bazaars. Then we have the Scottish School holidays when the it rains solidly for most of July! These holidays are of an historic nature timed to work with the potato, or tattie as it’s known here, harvest. In ancient school log books, (well Victorian from the times of Queen Victoria who was head of the Victorians) the signs are already there as headmasters complete their daily log for the Board with comments such as “School Roll down this week due to many boys with ‘an upset stomach due to holes in their shoes’. The holes would be genuine if indeed they had shoes, but the real reason was, and still is, because the Ayrshires are coming in and labour is required. There is nothing quite like a bowl of new potatoes and butter, with a sprinkling of chopped syboes (spring onions to you). Jasper loves nothing more than a plate of potatoes cooked in milk. Such a peasant, but it’s one of the things I have always found attractive about him. It’s just a pity he does not work like one. 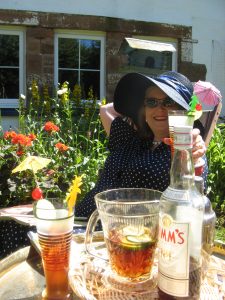 I am in the garden enjoying the last day of the good weather for the time being. It is a little humid and already in the north of Scotland there has been thunder and lightning. Indeed, several people have been killed by lightening strikes. There has been no rain for several weeks and as a result several serious forest fires have broken out taxing the resources of the Inverness Fire Brigade and the Forestry Commission. That reminds me, why are all their trees planted in straight lines? It looks so odd almost like an advancing army. No imagination if you ask me. 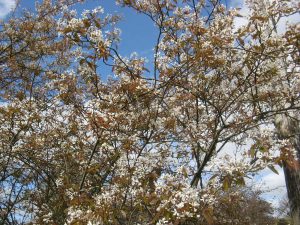 My own trees have been nothing but perfection, particularly those with the blossom. The exception being that “lovely lady” the laburnum which has been surprisingly poor. I often wonder why such a poisonous plant looks so beautiful. It will come as no surprise to you to learn that my garden, (the Giverny of the north as I like to think of it) is the envy of the neighbours both in Glasgow and particularly in our rural bolt hole where those who live here claim to know a thing or two about horticulture. 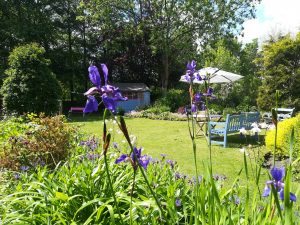 As the post man (who had just delivered a charming parcel of fragrant soaps from dear friend Louise from the right side of Carlisle ) said when remarking on how well my gooseberries were doing, “Who needs Kew when we have you, Mu?” Apart from the fact that I deplore such familiarity in an employee of the GPO, I took his point. I did suggest that in future “Mrs” might be more appropriate and now it seems I am known as “Mrs Mu.” Mrs Travers, my daily woman what does but not a lot, said I was known by many other names. She wouldn’t elaborate – in deference to my modesty and shyness regarding my abilities, I imagine.

Sheds – Who Makes The Rules?

Unfortunately, my garden seems to have become something of a talking point for the wrong reason this week because Jasper has painted the shed blue with pink highlights. 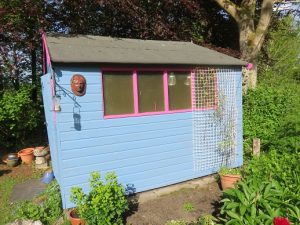 I think it must be an age thing. “Call me old fashioned, but a shed” I said “should blend into the background of the garden and not look as if it should be wheeled to the beach at Brighton disgorging Edwardian day trippers into the waves.” Jasper, of course, wanted to know who exactly made up the rules on sheds.

I am seriously wondering if this might result in us being disqualified from the Best Garden Section of the Fruit and Produce Show. Jasper has been encouraged by Hairy Mary the Nursery Nurse from Inveraray who looks after my ward Gayle. Mary has described it as looking like a perfect liquorice all sort. When Lottie Macaulay came to tea last week, she squealed with delight saying “Oh Muriel you have an enchanted garden, my husband would never do this. It must be wonderful to be married to a man who is in touch with his finer feelings.” I knew she had dubious taste. It’s what comes of spending one’s early years south of the river.

An Armada in the Paddling Pool

Anyway in a marriage one has to compromise and I am sitting facing the opposite direction, like Queen Victoria trying to avoid looking at something unseemly such as a surface without a doily. I am trying to read while Jasper and Gayle are playing in the paddling pool which was blown up this morning by Mrs Travers who has a remarkable lung capacity despite the Capstan full strength. It is hard to gauge who is having more fun – Gayle or Jasper.

Both are soaked and currently engaged in some recreation of a sea battle which judging by the shouts of “Olé” and Jasper trying to teach Gayle The Spaniard who blighted my life tra la la, has to be the Armada. No doubt Jasper is Francis Drake. This is hardly encouraging ladylike behaviour, but far be it for me to interfere. Anyway, I need to keep one beady eye on next door’s gardener who is making rather free and easy with new shears and my bush. No doubt all the clippings will be dumped on my side. The correct thing to do it seems, but so unnecessary.

At least I have a glass of Pimm’s to hand and my book. I do think summer reading is important don’t you? I am enjoying Sunset House by Lady Fortescue. Her earlier book Perfume from Provence, perhaps better known, tells the story of a house she and her husband buy for a retirement home in the south of France in the 1930s. Her husband was formerly the librarian at Windsor Castle and according to Jasper a noted authority on the history of the British Army. Sadly, he died after only two years and she decided to move to a smaller house. 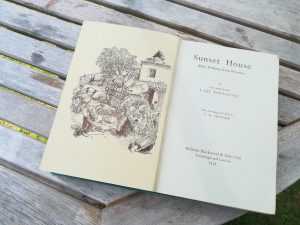 The purchase and restoration of her new home is the subject of Sunset House. Jasper says it is the usual story of the British gentry interacting with the foreign peasants, but while there may be an element of that there is humour and a real love of the south of France and its way of life. This is made more poignant by our knowledge that war is coming. Lady Fortescue, the daughter of a clergyman and a noted actress in her time, was made of strong stuff and she and an American heiress friend are not afraid to rough it. Her ladyship was forced to return to England with the outbreak of the last unpleasantness, but goes back to France for the remainder of her life. Jasper and I knew her briefly. As you know Jasper and I met in Nice and got to know Provence well. Like me her Ladyship made a garden and if I close my eyes I can smell lavender and sage. I recommend her story.

Jasper Has Been Interviewing

I am not sure I recommend Jasper’s current book which is Moby Dick. I have attempted it but while it may well be “the best book about the sea ever written” it is also, in my humble opinion, the most boring. Unless of course you are the curator of a whaling museum and require that amount of detail about harpoons. Still to give Jasper his due he is determined to read it to the end. I think he imagines himself as Captain Ahab.

He apparently had a busy morning interviewing for possible new History Society Committee Members. Most people would be glad to get anyone who could type and lick a stamp, not Jasper of course. Still one has to admire his dedication. I wish there was as much focus on the work that creates our income. He may not like being the face of the Magazine Rack, but it will probably pay for a wee jaunt in the autumn. Perhaps that is the tack I should take to persuade him to thole it. Jasper does like a jaunt away, as do I.

I managed to stay clear of the interviews but there did seem to have been a procession of ladies of a certain age up the path this morning. I did spy the unmistakable figure of the appropriately named June, who indeed appeared to be “bustin’ out all over” in a dress two sizes too small. Then there was Mrs Dangerfield, the Wanton Widow of Wigan. When I crept up and listened at the shed door all I could hear was shrieks of laughter and, “Honestly Mr Wylie, what am ah like?” followed by more shrieks. It’s hard to believe she has a great knowledge of Spindle Whorls as claimed in the application form. That’s the sort of woman who will get by with very little knowledge, just as June is a woman who will never feel the chill. 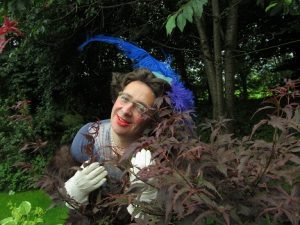 “Oh Patience, I wasn’t expecting you.”

“Well I was just on my way back from Dumfries and the opening of a new laboratory wing at St Joseph’s College, where I am a governor. Apparently, I donated Bunsen burners, whatever they are. Anyway, the Archbishop of Galloway was thrilled. I thought you would be there.”

“Well I was invited, naturally as a local woman who means business. I gave money for test tubes, but the weather was just too nice, and we are short staffed here today.”

“Yes, I did come to the front door, but no Mrs T so I came round the side and followed the sound of a sea battle. Before I forget, you are going to have to watch out, that gardener has almost destroyed your bush, must be new shears. Where is Mrs T?” 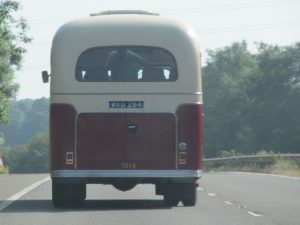 “Umm she has gone with some of the other daily women who don’t do as much as they could to a Church Endeavour Convention at St Andrews Halls.”

“I didn’t realise she was that religious.”

“Well nether did I, but her Billy’s son is appearing in the Junior Pageant as John Knox and her granddaughter is in the interpretation of the Glasgow Coat of Arms as ‘the bell that never rang.’ She apparently is also acting as an usher having been handed an inspirational leaflet by one of the organisers.”

“Surely not that one.”

“That’s a bit unkind; mind you Jasper said the same.”

“Perhaps we should adopt the same tactics.”

“Yes, I want to talk Madrigals. I refuse to be outshone by Pollok House and it’s verse speaking ladies or whoever they are. I do the Country House Concerts in the garden.”

“Well they are having croquet too.”

“Then so will I, I mean, we, only better. Let’s go for enchantment.

“You could have storks and hedgehogs.”

“Oh, never mind Patience, sit down and I will make some lapsang, but I am just going to speak to him with his shiny new shears first. I think Mrs Travers left a cherry cake. Have a look at my book, while you wait, it’s by a woman just like you. Lady Fortescue she was on the stage and married an aristocrat in the forces, although admittedly not with quite the same kind of clientele as yourself, she was more Beerbohm – Tree, than Berlin.” 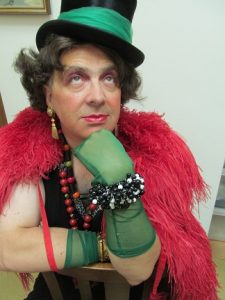 “A girl had to earn a living Muriel and Hitler was on the rise. I wonder if I should write a book.”

“Please no, oh dear it must be something to do with it being June!” 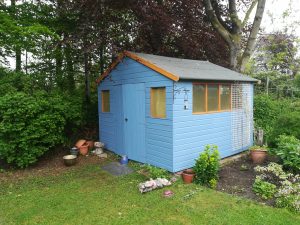 “That shed is a sight for sore eyes Muriel! Whatever possessed you?”