The Artemis website is the home of the Muriel & Jasper blog which is set exactly 60 years from present time. It was begun as an experiment to see if we could engage people in looking at the past in slightly different way and mixes the life of Muriel & Jasper with information about life in the 1962.  There’s lots of humour too, so sit back and enjoy a glimpse into the past.

Ruminating In The Club 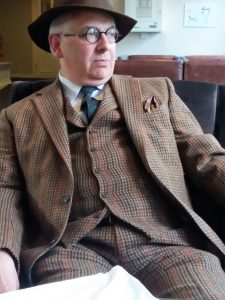 As far as I am concerned there comes a time in a man’s life when he has to make a stand.

Now for me that time has come. I ask you, dear reader, what would you do if you found your favourite corduroy slacks and tweed gardening jacket had been removed from your wardrobe as if by the Glasgow police in a dawn raid? Not only that but you have seen them on the Broomielaw where they are now the proud possessions of a drunken sailor newly returned from Buenos Aires with a bottle of brown ale in one hand and a business card for Janet’s of Jamaica Street – three floors up, second on the left, all tastes catered for. Exactly.

Muriel seems enthralled with Mrs Sloan’s (our new daily woman) undoubted domestic skills. Granted I have never seen anyone so effective with a toothbrush and a bottle of bleach, but I cannot help feeling there is something about her – in addition to her attempt to reduce my possessions. Would you believe there has even been a suggestion that she help me tidy my Museum in a Shed? 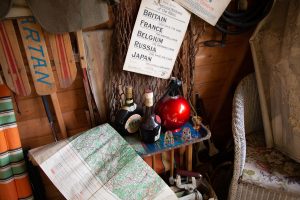 Now while I can always do with some help filing my index cards, there is no way I am going to let an untrained hand loose on my carved stone balls. So, I have added an extra lock to the shed door and am training the cat to act as a deterrent. 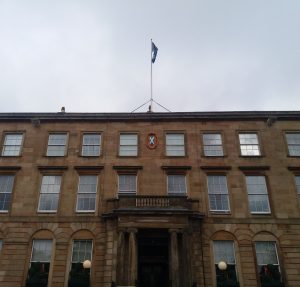 In case you are wondering I am in the R.S.A.C. in Blythswood Square, having a wee refreshment after a punishing morning at my Stockbrokers, where I deal with Mr Bond, and then at the accountants seeing Mr Chanter. We have been reviewing my portfolio. For the record Wall Street has been irregular, cloth trading is quiet and tea prices are firm. Bayne and Duckett, the leather and shoe manufactures, have had a very good year, no thanks to Muriel who buys her shoes from Rayne as they are the preferred option of Her Majesty.

Promising as well have been the results from Madame Tussauds. I have a small holding there thanks to a birthday gift some years ago from Cousin Lulubelle who had been left shares by a distant relative known as “Poison Ivy”, a descendent of The Scarlett Pimpernel clearly forgetting he was fictional. Anyway, that is as it may be. However, for a business established in the French Revolution by a woman born in 1761, it is a remarkable enterprise giving pleasure to millions and profits up from £168, 347 to £172,433. I must say I do feel a bit guilty about this as one cannot help questioning the idea of turning the guillotine into a business opportunity. 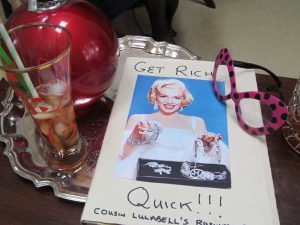 No point in discussing this with Cousin Lulubelle whose main concern is always the bottom line or should that be the headline? 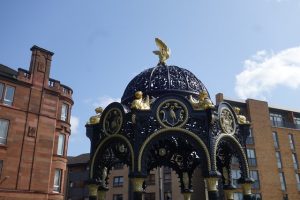 Of more immediate concern to me as an investor, and a Glaswegian, is the current difficulty in which The Saracen Foundry at Possilpark finds itself. Indeed, it has offered itself up for sale to Glasgow Corporation. Worryingly it employs 700 people at the premises in Hawthorn Street. Founded by Walter MacFarlane, it originally had its foundry near the Saracen’s Head in Gallowgate. They have always specialised in ornamental cast iron work, and you may find examples all over the world.

Your local seaside bandstand or ornamental drinking fountain was probably made by Mr Macfarlane, but you can also find his products in Louisiana, South Africa and South America. He was also famous for his decorative lavatories as well as his hatred of banks, whom he advised it was best to have nothing to do with. I may have to sell my shares, but I hope not.

Aw the road for tuppence, tae! 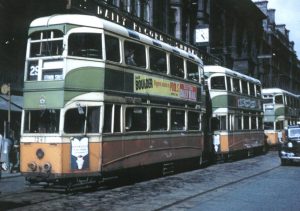 Another worrying aspect of change is that we are finally about to say the farewell to the Glasgow Tram, which has experienced  a long demise over the past decade. Just as Glaswegians are fond of their iron work, so they are devoted to the trams and trolley buses.

The first horse-drawn tram was established in 1872, running from St Georges Cross to Eglinton Toll. The trams were, even then, famous for their “smart neatly dressed postillions.” The ‘Glesca Caur’ (Glasgow Car, for those of you across the Pond) reigned supreme through the First World War until the 1920s when it was in competition with the motor buses. To my mind it has been a very democratic means of transport. Not only did the famous conductors and conductresses have the same scorn for all their passengers, but it was also cheap. For 2d you could ride from the terminus to Milngavie a distance of 23 and 1/4 miles. As they used to say, “aw the road for tuppence, tae”.

Unfortunately the congestion in the city centre and the building of the new overspill estates has signed the death warrant for the tram – it is too expensive to extend its operation system, apparently. I cannot help thinking it is a mistake and some years hence we may regret the loss of our trams. The decision has been made that the last tram will be removed in September, thought there is to be a celebration of its contribution to city transport with as The Glasgow Herald reports (so it must be true) “a gay rollicking cavalcade,” and the first tram driven by the Lord Provost Mrs Jean Robertson.

While we may be losing our beloved trams and elaborate iron bandstands may be a thing of the past, there are new things on the horizon, chief of which this year has to be the American style supermarket with its onward march and claim to our purses. The Grocers’ Federation is denying that it is worried about the spread of supermarkets. They say, and they say many things, that the housewife likes the idea of her local grocer’s shop that she has always known, where a familiar friendly grocer knows his sultanas and is best equipped to put them in paper bags and hand them over the mahogany counter or have a boy deliver them by bicycle later in the day. While the grocers admit that customers like prices to be the same wherever they shop, which they are not in a position to do, they will on the other hand soon tire of elaborate and unnecessary pre-packaging and gimmicky “hysterical advertising”. 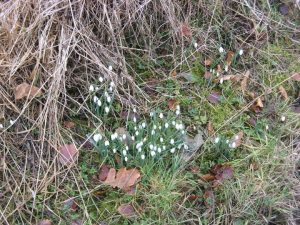 While change and uncertainty are always certain, there are life’s constants which help to anchor us in a sea of adversity and a morass of indifference. Take the seasons. Winter is passing, not soon enough for me and there are signs of spring with hellebores in the garden (have you remembered to cut off the old leaves to reveal the heads in their glory?) and of course snowdrops.

And that reminds me I am supposed to be addressing the S.W.R.I. tomorrow on the subject of these flowers. Muriel and Lady Pentland-Firth are hosting a “Snowdrop Tea” to raise funds for the Home for Fallen Women. This is an old Glasgow tradition, snowdrop teas that is, not fallen women, although that too. Muriel’s family were famous for their flower themed teas and her grandmother was particularly keen on the snowdrop. Her grandfather of course was responsible for the establishment of The Home for Fallen Women, as he felt Glasgow’s thrusting entrepreneurial businessman should take responsibility for these poor unfortunate souls.

Muriel is going to give a demonstration of how to arrange snowdrops to their best advantage. Apparently she requires shallow wicker baskets, cushions of moss and small containers to hold the flowers and if possible a piece of bark for the background.  My role is to introduce Muriel and when she has entered stage left “a vision of spring”, say something about the snowdrop itself. There is a lot of superstition surrounding this little flower. In recent times it has been rather like May Blossom seen as taboo.

In earlier times, however they were much loved especially by monks and one can find them illustrated in handwritten, illuminated manuscripts. It is said that they reach their height on St Valentine’s Day, their little heads bowed like the ready to be martyred third century Bishop Valentine. It is also believed that where he was executed snow-white flowers appeared and the sound of bells could be heard as if coming from heaven. It’s a wonder Madame Tussaud didn’t pick up on this for a tasteful panorama.

Well, I must dash, I have to pick up Muriel from McDonalds, where she is attending an exhibition about Dior and then this afternoon, I have to assist Mrs Sloan in the attic to locate green and white plates for the snowdrop tea. I imagine she already has much of the attic in alphabetic order. We are going to Edinburgh for the evening to see a new stage production called West Side Story. Apparently, it is set, not as you might think around Byres Road, but in New York near America and is commended for its direction and choreography. However, first things first –  I am going to buy some new corduroy trousers, even if as Muriel says they make me look like a beatnik.