In the Attic looking for Memorabilia 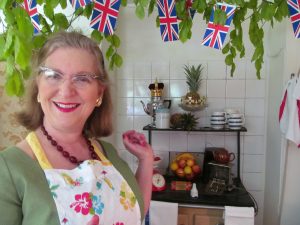 It is June 1962, nine years since the Coronation and a decade since Her Majesty led us into the New Elizabethan Age. Muriel is feeling nostalgic and in the party mood. She also has to write a piece for “The Glasgow Lady”.

First things first and she is trying to direct Mrs Sloan, the woman what does absolutely everything, who is in the attic as there is a search for memorabilia. Muriel is at the bottom of the stepladder, shouting encouraging words which are so far having little success.

“Can you give me an approximate location Mrs Wylie? There is rather a lot up here. I am surprised the ceiling does not cave in.”

“That’s what happens Mrs Sloan, when one comes from generations of interesting people doing interesting things. It’s a big responsibility being descended from William the Conqueror.”

“I said, is that the right side of the chimney breast or the left.”

“The right, Jasper’s things are on the left.”

“So presumably this Gladstone bag is not what we are looking for?”

“No, that was the one Jasper was taking his overnight things in on the Jarrow March, until he discovered there were no hotels or cake and coffee stops planned for the event. It’s got his collection of Fabian pamphlets in it.”

A fourth wall moment – This is when I realise that Mrs Travers our former woman what did but relatively little knew where everything was.”

“Well, Mrs Wylie I think this might be it, in the blue airport case, just behind your wartime secret radio set built into a wicker picnic basket.”

Some  time later after a good “dicht” (Scots’ for dust) with a clothes’ brush and a reviving coffee…. 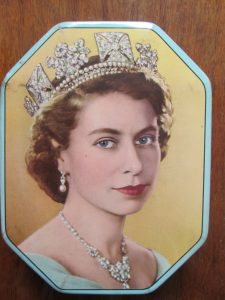 “Goodness, I didn’t realise I had kept so much.”

“I am not sure all this keeping things is a good idea Mrs Wylie, I prefer looking forward.

“I can imagine Mrs Sloan that you do, especially after all that you saw through the bushes at Cliveden House with your binoculars. That would be enough to affect the strongest mind. After all one expects a War Minister to have a grip on troop movements and not….”

“Don’t remind me Mrs Wylie! Anyway if you are all right, I have chores to do. There is more coffee in the pot and I have put a sheet of paper into the Royal for you to begin typing your nostalgic piece on the Coronation. While you are leafing through the Glasgow Bulletin and the Picture Post, I am going to make a Victoria Sponge and a Battenburg Cake for Mr Wylie’s Stamp Club meeting.”

“Oh, I had quite forgotten that. I hope they are going to be in Jasper’s Shed. I cannot bear all that talk of First day Covers and Sir Rowland Hill. Still, they tend to be quiet, I think it’s the lack of sunlight. Some of those collecting chaps don’t look as if they have been outside for decades.” 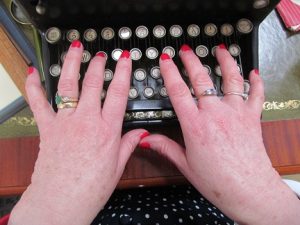 Our guest columnist, the simply marvellous Mrs Muriel Wylie, looks back to June 1953 and makes some suggestions for celebrating a decade of the Queen’s rule.

As they say (and they say many things), “no one minded the rain”, when almost a decade ago her Majesty drove back from Westminster Abbey after the ancient crowning ceremony. It was a glittering occasion and I dear reader, like many of you, watched it on our new television set with a few chosen friends. A  simply marvellous day in many respects,  though a tad tearful by the end of the day, as I am sure some of my ardent fans like dear Mr Bate will recall. 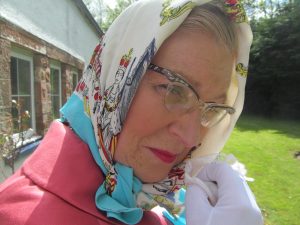 However, let us not dwell on that and look forward to celebrating the first decade on the new Elizabethan Age.

Of course, there were always those, in 1953 who disapproved and as my dear husband Jasper and The Bulletin, remind me were happy to put bricks through windows with Coronation displays, particularly in Scotland where there were objections to the use of The E II R symbol.

While we are on the subject of Jasper, he like a Mrs Barbara Castle, is a socialist and she said in The Bulletin at the time, that the Coronation “is wildly a misrepresentation of Britain,” and that it “ought to be the last of its kind.” I wonder if like Jasper she overcame her views for a second helping of Coronation Chicken.  As I say to him “Jasper, if you feel like this why don’t you and Mrs Castle go and live in Russia.” That said even the Russian Foreign Secretary Mr Molotov, “accompanied by Vice Ministers Gromyko and Admiral Kuznetsa attended the Coronation Ball in the British Embassy in Moscow.” No doubt they had their spoons in the delicious, curried chicken with sultanas.

Share the cost, don’t be extravagant and be inventive 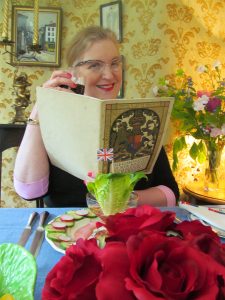 Now how can we economically celebrate ten years of Queen Elizabeth’s reign? My advice is “best kept simple.” Have a picnic in the garden or a garden party for your neighbours. Everyone likes a knobbly knees or best ankles’ competition. Let everyone bring something.

Lightly curried chicken is ideal for sandwiches and a little Spam on a bridge roll with a half pineapple ring is a reminder of those austerity times. Gayle, my ward rather likes some of the Bird’s custard recipes of the time and I do recommend their Jolly Jelly Ring, Chocolate Flagships or Celebration Custard Slices.

Once again don’t spend too much on flowers, do what I suggested for the public buildings of London in 1953, use sweeping masses of scarlet geraniums (red always catches the eye) and are good value or if you are more subtle like myself (taking my inspiration from Sissinghurst) banks of white flowers look wonderful. What could be more effective and inexpensive than Snow in Summer? For inside the house, an empty wine bottle with a large wide tin fixed to the cork in the neck filled with scrunched up chicken wire makes a fabulous vessel for my famous Hogarth Curve arrangement. All it requires is two pieces of broom from the fields, to form an S shape and three or four blooms and you have a work of art, fit for a Queen and your sideboard or telephone table. Assuming the GPO has agreed to your application!

Something to drink and pushing the boat out or should one say Royal yacht!

As to drinks – well you can never go wrong with  sherry for the ladies. Fino, for the summer, with ice is good. Ki-Ora for the children and some Double Diamond beer will suffice for the men. If you are splashing out, then what about The Bulletins’ Coronation Cup from a recipe by my dear friend Jean Balfour.

For the Coronation Cup you will need:

(For the unsophisticated this is a sweet dessert wine with a big flavour from the Bordeaux area. It is quite expensive. Thomas Jefferson, in the United States near America was a fan. Also goes well with foie gras or Shipham’s meat paste if you live south of the Clyde.)

Stir the Sugar into the wine in a mixing bowl, and add the brandy

Pour into a punch bowl for serving

Add soda water, sprinkle sprigs of mint and cherries when ready to serve

If it is a warm day some cracked ice is a welcome addition if you have a refrigerator.

Jasper is Revolting as is his Right

“Yes Jasper, what is it? I am busy writing my piece for “The Glasgow Lady” as you well know.”

“Not more ten years on the throne stuff, I hope! Have you seen my sun glasses?”

“Yes of course and no, but it’s not sunny anyway. Why do you need them?”

“Well, I am going out incognito. Some Glasgow students are commemorating it’s ten years since they took the union flag down from the good varsity and a proclamation at Aberdeen’s market cross called for The Republic of Scotland. There is talk of civil disobedience in the face of an unelected head of state.”

“Well, it’s your right to protest Jasper and my right to commemorate, especially as “The Glasgow Lady” pays so well. Now if you are arrested do you want me to get you bailed out or do you want a night in the cells.”

“I am prepared to be a martyr, Muriel.”

“I am sure Jasper, but you might have forgotten your etiolated chums are coming round this afternoon to swap stamps.”

“Well, I could telephone them and postpone in the aid of the cause. We are joining up with Grannies for Freedom. They are bringing  bloater paste sandwiches and crocheted brick covers.”

The Revolution is Postponed

“Splendid Jasper, you enjoy yourself and I will see you when you are released. By the way could you ask Mrs Sloan when she thinks the Victoria Sponge with the fresh cream and raspberries and the Battenburg Cake will be ready?”

“You didn’t mention cake, Muriel. Perhaps I will telephone the Grannies and tell them something has come up; after all I can always be revolting another day.”

“Pity Jasper I am sure they need you and I am sure the Coronation Cup will keep its fizz overnight, but perhaps not.”

“You mean the one with the Sauternes and the floating white grapes.”

“Isn’t that the one that goes particularly well with sponge and fresh cream?”

“Yes, I think you might be right. I can always keep you some.”

“Unfortunately, not, Big Nana. I had a wee mutton pie for lunch, and it has disagreed with me….Yes, I am devastated too Big Nana.! 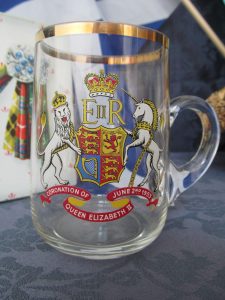 Here’s a health unto Her Majesty!