Jasper’s Jottings: A Sojourn in Sussex by the Sea

The weekly blog from Jasper this week sees the simply marvellous couple and their entourage in Brighton, 60 years ago. 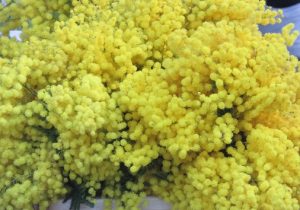 Now I do not, as the bishop said to the actress, like to be premature but there are hopeful signs all around us. Snowdrops are making their presence felt even in our little corner of the worldTand I have bought Muriel her first bouquet of mimosa already this month. The days are just that little bit longer. Mr Burns has had his annual night in the spotlight and the population of Auld Scotia is “puir fit tae bust” after a weekend of haggis, neeps, tatties and clootie dumpling. Before you ask, no that is not served with custard, but white sauce. It is, however, frequently boiled in a top loader.

More than a few of us have endured several suppas and the aftermath of too much Swedish turnip. Still as Mrs Travers our daily woman what does (but not a lot) says “better oot than in.” Our Prime Minister Mr Macmillan is clearly of the same mind as he continues to make his “Wind of Change” speech throughout Africa. Here Britain’s days as an imperial power are over. It seems our future lies with Europe, which is sensible and, surprisingly perhaps, is Muriel’s view. She favours our membership of the European Economic Union. When asked on the wireless recently why she thought this was the sensible course for our nation she said, “I am sure it will be imperfect but if it preserves the peace then the sacrifice will be worth it.” Muriel, of course, played a major role in the last Unpleasantness, when she was behind enemy lines with Winnie (she of the bicycle and the wool shop) and Dynamite Di.

It’s a Question of Social Justice

Muriel’s other guiding philosophy, underpinning the wider gracious living umbrella, is education. Despite our support of different political parties, as she says “I am right you are wrong”, we are at one on this. I speak as someone who failed their School Leaving Certificate, mainly because Granny Wylie and I were hiding in the shared lavatory in our Gorbals tenement due to an unexpected visit from the Sanitary Inspector. It’s not that Granny wasn’t spotless, indeed she was a proud working class woman who was always vinegar washing her skirtings and Spanish whiting the steps. It’s just that, well, she had several illegal side lines on the go to help make ends meet. Her gin flavoured tablet might have passed muster except it was made with gin produced in her own Belfast sink and then there was all that help she gave the young ladies of the neighbourhood. So I missed the examination. It wasn’t that she had criminal tendencies, she just had to make ends meet. After all she was left with a grandson whose parents had died in a custard powder factory explosion.

Do It With Good Design

Muriel is involved in a number of charitable and improving activities, over and above her well known work for fallen women and orphans. Despite her affection for what she calls the very good varsity here in Glasgow, she believes there needs to be an expansion in University Education particularly for “useful learning”. To that end she has been advocating that the Royal College of Science and Technology in Glasgow should become a second university – the University of Strathclyde. Her work in this area has attracted the attention of the authorities in Sussex who also wish to have a new varsity of the modern variety.

As design and ambiance are everything for Muriel she was invited to Brighton last week along with her recommended architect, Sir Basil Spence. She has known him since the 1938 Empire Exhibition in Glasgow. Muriel decided it would make an interesting trip for not only myself, but for Mrs Travers, (well someone needs to carry the Mackintosh Squares), Hairy Mary the Nursery Nurse from Inveraray and our ward little Gayle, who is now old enough to become a “simply marvellous-ette.”

A Day in London

We travelled by way of London and the Imperial Hotel as Muriel had some business with Peter Jones, the department store in the Kings Road, where they have asked her to design A Room for Living in 1960. While Hairy Mary and Gayle went to the Zoo, I took Mrs Travers to see the house where Charles Dickens’ lived in Doughty Street. Her twilight class is currently studying Oliver Twist on the subject – “Was it Dickens’ most political novel? Discuss.”

Mrs T was entranced by the living arrangements and felt the treatment of Catherine Dickens mirrored her own experience with Mr Travers, who was also one with a roving eye. She was also quite overcome at seeing the desk he wrote at though felt it needed a good going over with some polish.

In the evening we saw Dimitri understudying for David Blair in the comic ballet La Fille Mal Gardee. You might recall that Dimitri escaped from the comrades and stayed with us for a while as he was a very good chum of our nephew Sebastian, a thespian now living in New York. They even shared a room together and swapped colognes. This new version has been arranged by Frederick Ashton; it has I am told a marvellous “pas de ruban” featuring miles of pink satin ribbon. 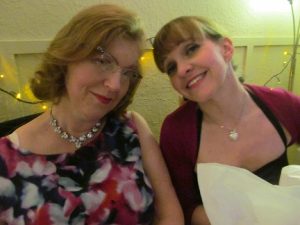 We all agreed that when we saw the Fanny Elssler pas de deux, all that was missing was our dear friend Lulu from the right side of Carlisle. Mrs Travers was not amused and said (unlike Lulu who is theatrical) the sight of men in tights was more than she could stomach. Not that it put her off her food.

This was most apparent when we arrived by Electric Southern Railways in Brighton. On the recommendation of Gary and Edd, our Sussex chums, we tried Sussex Pond Pudding. I have to say this is quite delicious and not at all slimming. It is made of suet pastry filled with butter and sugar and is boiled or steamed for hours. Sometimes it includes a whole lemon inside the pastry. It is first recorded in Hannah Woolley’s 1672 book, The Queen-Like Closet. Now there’s a thing. Apparently, there are variations and when made with currants it is known as Black-eyed Susan’.

Mrs Travers is very taken with this and has resolved to make a version when we get home. I heartily approve. Muriel says it’s no wonder Dr Richard Russell (1687-1759) recommended sea bathing at Brighton for its beneficial effects on the liver. His complimentary idea of drinking sea water has, however, never taken off.

Brighton has Many Faces 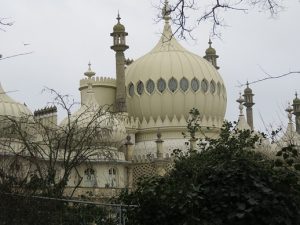 Talking of the Queen, Queen Victoria that is, it seems Her Majesty was not very fond of Brighton indeed she called it “Prison by the sea.”. She found the Pavilion built by The Prince Regent, too small. 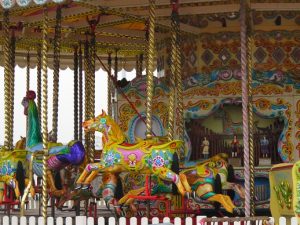 I think it is a place that confuses people. It is on the one hand very elegant and royal and on the other a place of attraction for day trippers from London. There are beautiful buildings and there are also bright lights, helter-skelters, merry-go-rounds, candy floss and toffee apples. There are antique shops and cheap souvenirs. There is the smart Steine area with Marlborough House and the Royal mistress Mrs Fitzherbert’s house and then the pier with it’s ghost train and amusements. It is a place that has attracted royalty and those of a more liberal bent like politician John Wilkes (1725- 1797). Edward Gibbon, the historian, came here as did Dr Johnson who was reputedly a very good swimmer. He would have been aided by the bathing women who assisted their patrons before sunrise.

I could see Mrs Travers as a bathing woman a bit like Martha Dunn, (1726-1815) the most famous of the “dippers.” Dr Johnson was not a Brighton fan; he said so truly desolate …that if one had a mind to hang one’s self for desperation at being obliged to live there, it would be difficult to find a tree on which to fasten the rope. It was, despite the good doctor who wasn’t overly fond of Scotland either, such a popular place in Georgian times that it had two Assembly Rooms and many circulating libraries and four times a week 300 or more people would sit down to play cards. The social scene was often presided over by “the vicious Mrs Thrale” and there was also a master of ceremonies a Colonel Eld who died in 1855.

It’s the Different People that Make it Interesting 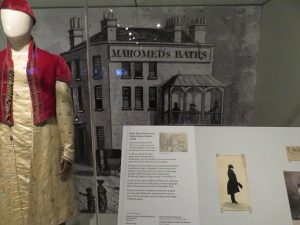 Brighton seems to have always attracted those who are different in some way. One of the Brighton characters who fascinates me is Sake Dean Mahomed, the shampooing surgeon to H.M. King George IV. He was many things – a soldier, author, restaurateur, medical practitioner and a bankrupt. He opened a bathhouse in Brighton in 1821 and wrote a book on the therapeutic effects of shampooing which comes from the Indian word champo relating to a head massage with oils.

As I write Brighton is becoming more and more attractive to the ton-up boys with their British bikes and those Moderns who like sharp suits, lambrettas and coffee shops. It’s a popular place for the Variety Club and London Taxi Drivers too who bring disadvantaged children for a day out to the seaside. They have tea at Hove Town Hall and meet popular entertainers, as well as having a play on the beach.

It’s a very design conscious place as its museum demonstrates and Muriel thinks it is going to become very popular with the youth market in the next few years. 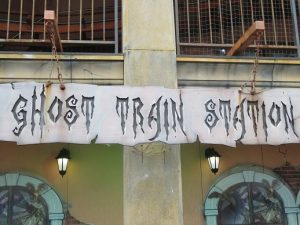 “Well Mrs T would you like another go at the arcades, so long as we don’t tell Muriel? You know what she can be like about gambling.”

“Ooh I don’t know Mr Wylie. That candyfloss and the ghost train on top of the pond pudding and several days of Burns suppers before hand has given me the boke.”

“Well we could go and look around the Royal Pavilion?”

“No thanks Mr Wylie I cannae stand they dragon chandeliers despite ma vulgar working class taste. And frankly the whole place looks like a pile o’ onions.”

“Well we need to do something before we meet Mrs Wylie for tea.”

“What’s she doing now? Is it that new varsity again?”

“No, she is having a meeting with the Mayor as to how the town might become simply marvellous in the 1960s and then Gary and Edd are going to show her the Laines. What about having our fortune told at this caravan conveniently parked on the pier?” 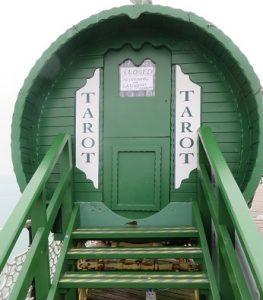 “Tell your fortune luv, cross me palm with silver.”

“What do you see Gypsy?”

“I see small plastic skirts in something called PVC, I see four boys with silly haircuts from Liverpool near Manchester. I see backcombed hair, I see riots on the beach. I see a Labour government.”

“Do not interrupt Gypsy Cream when she is in full flow.”

“Is that woman Mrs Travers?”

“Silence Mr Wylie the veils are coming down, the mists are returning.”

“Just a minute, how do you know my name?”

“I ken that voice, let me lift your veil. Why it’s Bunty Haystack, the rural crime writer, well I never. Gi’e me back ma half crown.”

January 1960 on the pier in Brighton