Our favourite couple from the 1960s are on their way back from Across the Pond, and the blog returns with its weekly posts. How simply marvellous!

At Pan Am’s Worldport, New York for the 10am Flight to That London 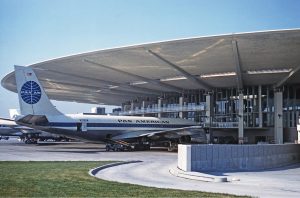 “There you are Muriel – Vogue, Harper’s Bazaar, Woman’s Day; and The New Yorker and Life for me. That should occupy us during the flight.”

“Thank you, Dahling, that all looks very diverting, just what we need. Now what about coffee and a last chocolate brownie?”

“I am going to be exhausted traipsing about this building.”

“Don’t be ridiculous. You are going to be sitting for hours and you have spent three months eating as far as I can see. Honestly, I think Betty Crocker will go bankrupt when we take off.”

“Do you want a little brandy with it?”

“Why not? It will help us relax. These trans-atlantic flights are tedious, even first class.”

“We could have sailed home.”

“We could have, but as I recall Jasper you were the one who said that you would rather get home sooner rather than later; that you couldn’t wait for a blast of Glasgow smog and a well fired morning roll and flat sausage.” 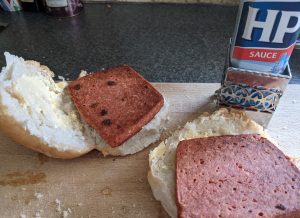 “Well, I have had my fill of hash browns, easy over eggs, marmalade on the bacon and pancakes and syrup. Really, who eats syrup for breakfast?”

I must say I do like Harper’s Bazaar. They manage to combine the things women are interested in, at least sophisticated simply marvellous women like moi, with an understanding that we have a brain as well as an ability to accessorise. 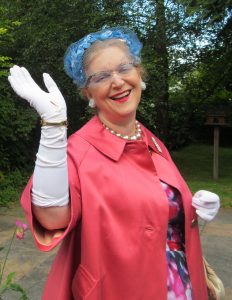 I shall look forward to reading “The Secret World of Beauty”, not that there will be much I can learn. Then there is  “Fashion Intrigue”, now the world of frocks has always been one that has its darker side. I am not sure about “Thoughts on Food by Men of Letters”, seems like a contradiction in terms to me or at least setting up problems for the future. If we allow men to think about food other than being grateful for what is put in front of them, we are, ladies, asking for trouble.

Ooh I rather like this advert in A Woman’s Day, “Lips and Tips”. It is for a clever package by Color Plus which contains a lipstick at one end and nail polish at the other. It may not be quite the amazing miracle they suggest, but this is the side of America I shall miss. Anything seems possible, even the prevention of drying lips and cracking nails. I am not sure that Woman’s Day is quite my thing, I mean “Crochet a Hat”. Why, one has to ask? I have never quite understood crochet, it always seems a bit desperate and south side to me.

That said there are recipes for meat loaves. Now if there is one thing that Americans are very fond of it’s their meat loaves, and I must say they are very good for picnics. I notice they suggest making them in pairs, eating one and freezing one. I think the Americans would find the nature of British fridges amusing, let alone the absence of freezers. Now that’s interesting, Hairy Mary from Inveraray (looks after Gayle our ward) might be interested in this, “Hallowe’en Costumes – With a New Look“. 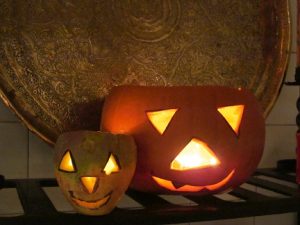 I will be sorry to miss Hallowe’en here, the Americans go in for it in a big way. 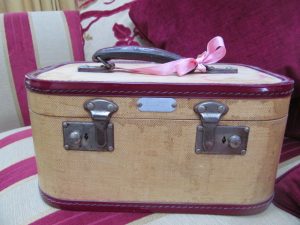 “There you are Muriel, coffee, a chocolate brownie and a wee brandy to settle the stomach.”

“Thank you, Jasper, don’t trip over my vanity case and for goodness sake don’t let me forget my copy of the White House decoration folio. One day it will be of great interest to historians.”

“You could have put it in the hold.”

“I could have Jasper. However, that nice young man on the Pan Am Check-in Desk was unable to confirm whether First Class luggage was kept separate from Tourist.”

“I am not quite sure that is something to worry about Muriel.”

“Hmm, but then you are the man who bought a checked jacket in Bloomindales that makes you look like the bookies’ runner.”

“That is us Dear. Let me carry your magazines.”

“Thank you and if you could take my vanity case and White House folio, I should be most grateful, I do not want to enter the world of Jet Clipper Magic looking like a pack horse. Oh yes and this hold-all.”

“Oh, just the Mackintosh Squares, in-flight overall and turban in case they haven’t changed the headrests and a pair of swans’ down mules in case my feet swell.”

“But Muriel, it is President Class.”

“Jasper you are speaking to one who has been in the Oval Office with the President. Let me tell you he was pretty quick off the mark to steady my step ladder when I was trying to see what a set of four gilded plaster flying eagles would look like over the fireplace. President Class does not impress me.”

“Quite good, I felt it softened the mood, but the President thought it might send out the wrong message to the comrades.”

Getting Ready for Take-off 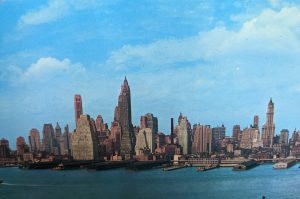 “Hi there, Mr and Mrs Wylie, my name is Cindy Lou and I shall be your President Class Hostess for the flight to London. Would y’all care for a cocktail from the trolley before take-off?”

“It is bit early, but why not, two Manhattans if we may. Seeing as we shall soon be flying over it and saying farewell.”

“Sure thing, and if you need anything and Aah mean anything just let Cindy Lou know.”

“I must say I rather like your glass drinks trolly Cindy Lou.”

“Why thank you kindly, it actually plexiglass for safety, but rather stylish Aah agree.”

“I think we might look into stocking those at ‘Chez Nous’ Jasper – very South side, executive development. I can just see these whizzing around the Broom Estate.”

“There you all go now –  Sir, Madam, little ole me will be back after take-off.” 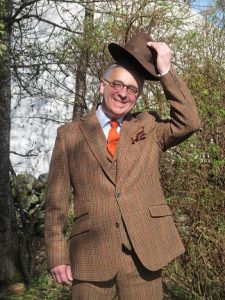 “Ladies and gentlemen this is Captain Troy speaking, tall dark and handsome, or so Cindy Lou tells me! In a few moments we shall be leaving for London near England. Please fasten your seat belts and extinguish all cigarettes. Might I give a special mention to Mrs Muriel Wylie, the White House decorator who is travelling with us today and her husband Mr Jasper Wylie, International Man of Tweed – welcome on board.”

“What are you reading Jasper?”

“Life magazine, or at least I am trying to.”

“An article about Elizabeth Taylor returning to the set of Cleopatra.”

“Of course, she was near death’s door in hospital, with £5 million already having been spent on that film.”

“I’ve heard it said that she is the most valuable screen actress alive, but no one would insure the film for a second time. They seem to have sorted it out and filming has started again.”

“They say she is the most beautiful woman in the world.” 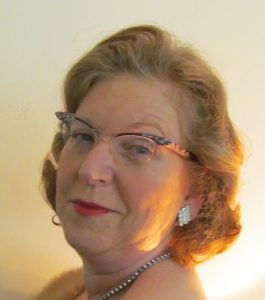 “Oh, Jasper you say the nicest things…. Isn’t that Labrador down there?”

“Yes, Muriel; and as you are bored, shall we have another drink and just chat?”

“That was very kind of the First Lady to let us have a couple of days in New York, she has been an excellent hostess.”

“Yes, Muriel she has, but I think she knew that you wanted to see the exhibition at MoMA.”

“I rather think she was impressed that not only did I know Matisse, but I was responsible for giving him the idea with the scissors, which incidentally he never returned, for the cut outs.”

“It was a tremendous exhibition Muriel, but I am not sure they were entirely pleased when you pointed out that they hung Le Bateau upside down. Did it really matter after all? Perhaps some things are best left unsaid, and no one noticed, not even his son.”

“It may not have mattered to anyone else Jasper, but it mattered to me. After all in a picture that is a reflection the most detailed part is going to be on the top not the bottom. A reflection of a boat in the water is not going to be more detailed than the actual object above, is it?”

“There y’all are, Salmon with Hollandaise Sauce for Madam and the Steak Diane for the gentleman.”

“Tell me Muriel are you going to miss America?”

“Yes in many ways I will. They do service so well and I like the attention to detail – we have much to learn. However, I shall be glad to get home and see Gayle and even Lady Pentland-Firth and Lottie. I am also keen to see what Mrs T is up to, or not up to as the case may be. It has been a wonderful opportunity and I know the rest of the work is in safe hands. Surprisingly, I have missed all our friends in town and even the rustics in the rural bolt hole and I am sure they are missing us and my life affirming advice.  What about you Jasper?” 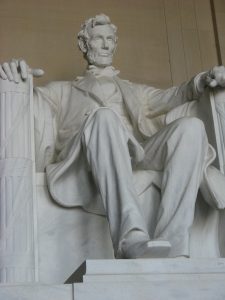 “Yes, dear I shall miss many things. I enjoyed the sightseeing – going to the Lincoln Memorial and the trip to see Jefferson’s House at Monticello. 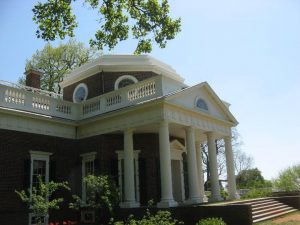 I have, however, missed my Museum in a Shed and the Hysterical Society. Oh look down there, it’s the West Coast of Scotland! Not long to go now. By the way I have a surprise for you Muriel, we are staying overnight in London.”

“I know that Jasper, we are booked on the Royal Scot tomorrow morning.” 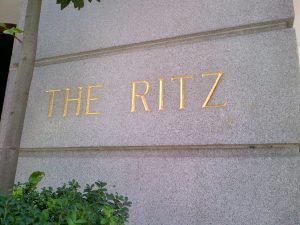 “Yes, but to mark the end of Muriel Wylie Goes to Washington, we are staying at the Ritz.”

“Jasper you appear to be unconnected with the real world, but sometimes you do the nicest things.”

Meanwhile Back in Scotland 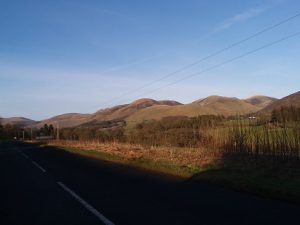 A long restful summer has been enjoyed by the residents of Glasgow’s sophisticated West End avenues. Equally the same is true of those who dwell among the hills and streams of South West Scotland where the bourgeoisie of the Second City have their rural boltholes. There has been something of a carnival atmosphere, even at the Church of Scotland. In all matters, be it manners, poise, meringues and even tray bakes one might almost say there has been a laxity, bordering on revolution, but summer’s lease has all too soon ended. The “nights are fair drawing in” and on everyone’s lips the same words are to be heard, “Did you get a post card? SHE’s coming back! Fasten your seat belts.”